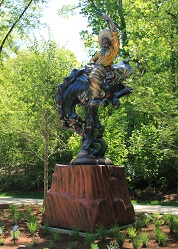 A few weeks ago the Arkansas Museums Association hosted it’s annual meeting in North Little Rock. The meeting is a wonderful two and half days of sessions and events that allow museum professionals from all over the state to get together to exchange ideas and offer each other support for challenges that they might be facing. I attended the conference as a board member and I presented a session on new technologies in museums.  Our Director of Security Geoff Goodrich also presented on everyday security for museums. 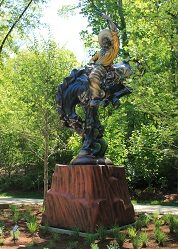 The annual meeting concludes with the awards banquet, which is always a special occasion as we take time to recognize each other’s accomplishments.  My position on the board is as the representative from the third congressional district and I’m proud to say that out of the eight categories of awards five awards went to museums in our area. (You can see award winners on the AMA’s facebook page) Crystal Bridges received recognition for Outstanding Achievement in Conservation for work done on Luis Alfonso Jimenez’s sculpture Vaquero.   Below are excerpts from the nomination to help explain how important this project was:

Vaquero is a fiberglass sculpture with an internal steel frame and a decorative surface consisting of layers of color paint covered by a protective clear coat.  Lengthy periods of outdoor display, as well as the nature of the acrylic urethane paint used by Jimenez, resulted in areas of damage and deterioration that threatened the sculpture’s original decorative surface. 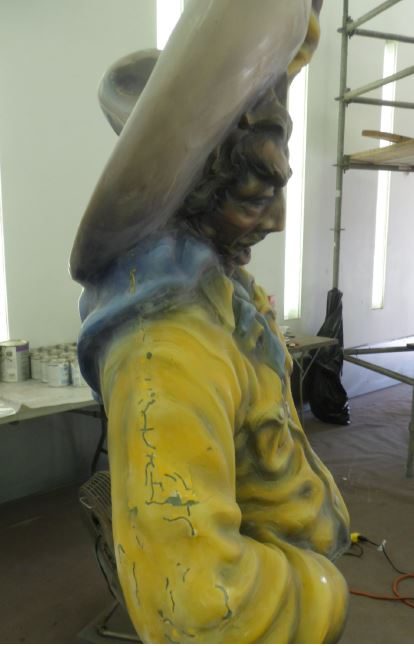 This pre-conservation photo shows some of the damage to Vaquero’s surface.

In 2011, Crystal Bridges began working with Robert Pringle Art Restoration to carry out a comprehensive treatment of Vaquero.  In March of that year, Pringle made a site visit to El Paso, Texas, where the sculpture was located at the time, to assess its condition and develop a treatment plan. The damage noted included crackling, paint loss, and delamination of the clear coat on several surface areas.  Pringle proposed a treatment plan and the sculpture was relocated in October to Houston, TX.  Upon examination at the facility, more extensive damage was discovered.  Areas of significant damage included the figure’s hat, pistol, and saddlebag; and the horse’s tail, mane, and legs.   Once begun, work on Vaquero had to progress quickly in order to ensure proper bonding of the paint and clear-coat layers.  Areas of delaminated clear-coat were removed and oxidized, and exposed paint surfaces were wet-sanded.  Areas of open cracking and air bubbles were filled, consolidated, and wet-sanded as well.  Prior to repainting, the surface of the sculpture was scuffed and cleaned, and areas of paint loss were repainted with original colors.  After repainting, the restored surface was given two layers of protective clear coat. The steel base plate, which suffered extensive rust and peeling paint, was also cleaned and primed.   The sculpture base also received attention.  A single layer of peeling paint covered the stucco surface of the base.  Pringle removed the old paint and filled the cracks in the base.  The base was repainted, using a sample area of unexposed old paint to indicate the original color.  Substantial treatment of the sculpture and its base was completed by July, 2012.  Just prior to the sculpture’s installation on the grounds of Crystal Bridges in March 2013, the base’s rusted steel frame was cleaned, primed, and given a protective coating.    Because Vaquero is installed outside, its condition will be monitored regularly.  The maintenance schedule recommended by Robert Pringle is an application of clear coat to the sculpture every seven years and treatment of the base every five years.

As you can understand, the conservation of this work was a great accomplishment, and I was honored to accept the recognition on the Museum’s behalf! 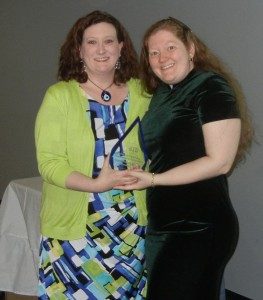