Saldamando’s artwork Martin’s Cincuentañera (2018) features Martin Sorrondeguy (also known as Martin Crudo), the lead singer of queer punk bands Los Crudos and Limp Wrist. Enveloped in lush blue waves breaking all around him, Saldamando’s work recalls Hokusai’s The Great Wave off Kanagawa and Yemaya, the popular Afrodiasporic orisha, or goddess, of the sea. Yemaya’s maternal aspects are highlighted here as Martin represents futures that queer youth now have access to with the expansions of LGBTQIA+ civil rights in the US.

The layered metaphor of the “cincuentañera” within the title is a reference to a quinceañera, the celebration of a 15-year-old girl’s passage into maturity/womanhood. Quinceañeras are celebrated by families in Mexico, Latin America, the Caribbean, as well as in Latinx communities in the US and other countries.

Saldamando’s depiction of Crudo as a “cincuentañera” celebrates a 50-year-old queer punk icon’s passage into maturity/elderhood. This milestone has been historically rare for members of the LGBTQIA+ community who have had disproportionately shorter lifespans than their cisgendered and heterosexual siblings because of systemic issues such as institutional and structural/social homophobia and transphobia, as well as the impact of the HIV/AIDS pandemic. 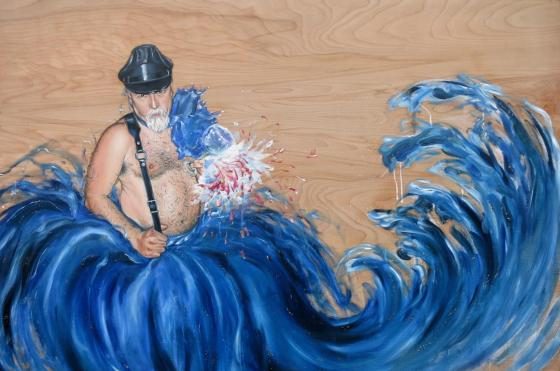 Based in Los Angeles, Shizu Saldamando was born in San Francisco to parents of Japanese American and Mexican American heritage. She focuses on depicting important figures of Los Angeles’ Latinx, activist, queer, and punk communities, including artists, singers, scholars, activists, and advocates. Saldamando’s art is based in autobiography wherein all sitters are friends or people from events that Saldamando has attended.

Her work has been exhibited at the Vincent Price Art Museum in Monterey Park, CA and at the National Portrait Gallery in Washington DC. She received a BA from the School of Arts and Architecture at UCLA and an MFA from California Institute of the Arts.