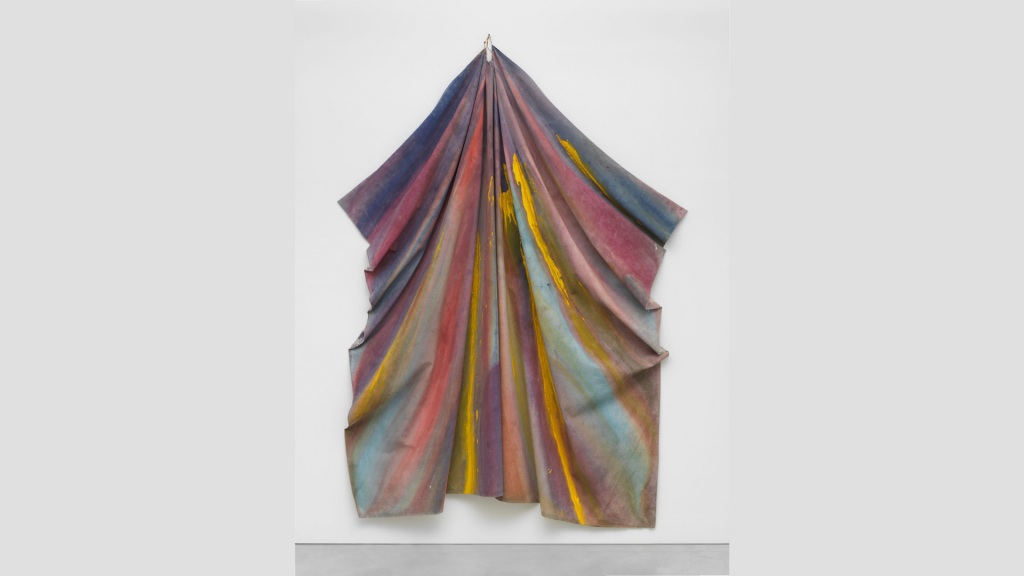 Crystal Bridges is thrilled to announce the acquisition of Mazda (1970), an early drape painting by the renowned artist Sam Gilliam. For more than 60 years, Gilliam has pushed the limits of traditional painting. In the 1960s, he received international acclaim for his drape paintings as he continued to explore abstraction through works that jumped off the wall, an exploration that would continue throughout his career. His mixed media work, Black and Golden Door (1996), was a gift to the Crystal Bridges collection in 2016, and Gilliam was featured in Soul of a Nation: Art in the Age of Black Power, which was on view at Crystal Bridges in 2018.

Mazda reveals the power of Gilliam’s experimentation in this massive abstract work that cuts a striking profile on the gallery wall. At more than 11 feet tall and 7.5 feet wide, it envelops viewers standing in front of it. Gilliam turned away from the traditional painting conventions of tightly stretching canvas over stretcher bars to create his drape paintings. For Mazda, he removed the stretchers completely so that the canvas hangs from a single screw and cascades downward in a collection of drapes.

Overlaid with brighter yellow acrylic paint on top of muted purples, pinks, and blues, Mazda presents a variety of surface textures in addition to the light and shadow play resulting from the work’s many folds. This arresting spectacle of color and texture creates a gravitating and soaring presence in the gallery.

Mazda is now on view in the Contemporary Art Gallery. Gilliam has lived and worked in Washington DC throughout much of his life and was associated with an artists’ group called the Washington Color School alongside artists such as Alma Thomas, Morris Louis, Kenneth Noland, and Gene Davis. These artists were known for their abstract, simplified works featuring bright, vivid colors.