Communities in Solidarity and the Art of Jacob Lawrence 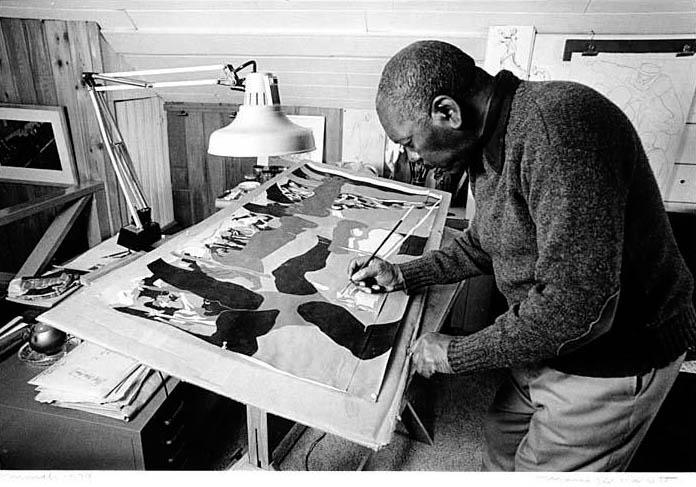 Your Google Doodle this morning links you to the history of New York City’s Silent Parade, which took place  on this date 100 years ago. The city’s Black population marched down Fifth Avenue in silence to protest violence against Black people in America.  The protest was sparked by the brutal mob murder, by whites, of an estimated 240 Black citizens of East St. Louis on July 2 of that year.

Some 10,000 men, women, and children marched in protest. The organizers, which included Black luminaries such as  James Weldon Johnson and W.E.B. DuBois, had instructed that the women and children should walk in front, clothed in white, and the men at the back, all in black. There was to be no noise but the sound of thousands of feet against the pavement, moving to the beat of muffled drums.  They even gave instructions a to the slogans to be printed on placards.  Among them:  “Make American Safe for Democracy,” “Thou shalt not kill,” and “America has lynched without trial 2,867 Negroes in 31 years and not a single murderer has suffered.”

You can learn a lot from Google Doodles, it seems.  This is a page of African American history I am a bit embarrassed to admit I knew nothing about.  Unlike the civil rights marches of the 1960s, the Silent March wasn’t covered in the elementary and high school curriculum of the 1970s and ’80s when I was in school.  But the image is powerful, especially that of the women, all in white, marching together in silence.

That solemn, mournful silence brings to my mind Jacob Lawrence’s somber painting, Ambulance Call.  The stark white clothing of two of the figures, the presence of injury or death, and the downcast, mournful expressions on the faces of the people gathered around all evoke the same sense of community suffering that the Silent Parade symbolized.

Lawrence was born in New Jersey in the year of the Silent Parade, 1917 . At 13, he moved with his family to New York City, and began to study art among Harlem Renaissance artists such as Charles Alston, Augusta Savage, and Henry Bannarn.  He became well known for painting scenes of African American life and history. He was drafted into the Navy during World War II, and upon his return, he created a series of paintings called The War Series that captured—in Lawrence’s signature bold, blocky style—the everyday existence of a soldier, as well as the heartbreak of family members at home when notified of their loved one’s death.

In 1949 Lawrence became deeply depressed, and admitted himself into Hillside Hospital in Queens, where he spent 11 months.  Ambulance Call was painted the year before, in 1948, and seems to reflect the artist’s growing melancholy.

In the 1940s, the Harlem Hospital was the only facility in New York City that admitted black patients; consequently, ailing or injured blacks waited significantly longer to get medical treatment than did their white counterparts. In this Harlem street scene, ambulance attendants lift a stretcher carrying an ailing figure covered in white sheets. A paramedic stands by, monitoring the victim. Surrounding this trio is a densely packed crowd of spectators, whose downcast eyes and sad expressions suggest that they are not anonymous onlookers but rather a close-knit community of neighbors, friends, and family.

This community solidarity , expressed in the Silent Parade thirty years before Lawrence painted this work–would later become the hallmark of the Civil Rights Movement under Dr. Martin Luther King Jr., when young Black men and women would again assert their presence in acts of silent resistance.  During the Civil Rights Era, Lawrence would continue to document the life and times of Black Americans with paintings that depicted these protests.

Lawrence enjoyed a long, successful career as an artist and teacher.  He was actively working right up until his death in 2000, at the age of 82.