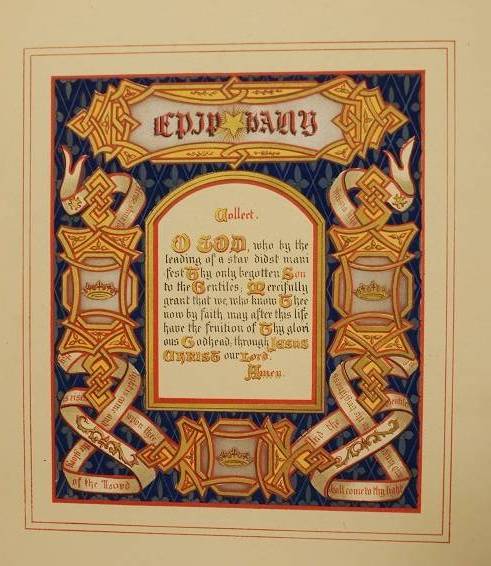 From “The Illuminated Christian Year”

I am often surprised to run across lovely illustrations of the holiday season in books and other Crystal Bridges’ library materials.  On the other hand, it really isn’t that unusual when one considers how many artists made their living illustrating books—so why not holiday cards? It also makes sense that many artists would naturally design their own creative greeting cards—personal small works of art designed specifically for dear friends or other artists.  So at this time of the year, I decided to review holiday materials from both our general reference collection and our rare special collections. 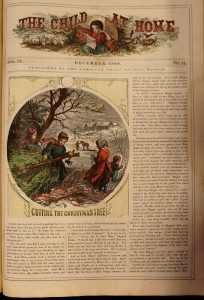 Lithographer Louis Prang (1824 –1909), known as the “father of the Christmas card,” produced many series of themed color cards that were collected, traded, and assembled in card albums, or “scrap” albums. It was a popular activity in late nineteenth-century America and was often used to teach organization and classification skills to young people. These series of small chromolithographic cards illustrated a variety of topics, including history, nature, and culture; and served a variety of purposes, including product promotion, postcards, and holiday cards. Collecting them became a favorite Victorian pastime of children and adults alike.

Christmas illustrations can also be found in magazines, books, poems, and children’s stories from the nineteenth through the twenty-first centuries. The variety of interpretations of Christmas images range from tranquil snow landscapes and traditional religious scenes to abstract, simplified colorful images of Santas, reindeer, and elves. 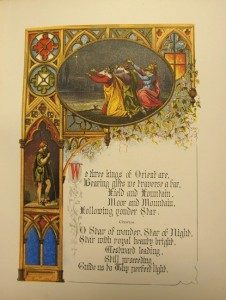 Let’s start by viewing a lovely example of a holiday image: “Cutting the Christmas Tree,” from the December, 1868 issue of the nineteenth-century periodical, The Child At Home, a children’s magazine published from 1859-79. The holiday image is one of many hand-colored engravings from this scarce periodical (each issue contains an upper masthead of a child reading, and a themed topic image below). Topics in other issues include slaves freed by the goddess Liberty, a family waving goodbye as they leave on a voyage, a bear and fox hunt, and a white girl teaching two small black children to read.

Below are additional holiday images from our rare book collection. 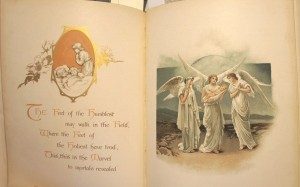 Three kings of Orient, 1865 A Christmas carol. New York: Hurd & Houghton. The chromolithographs in this book were printed by Julius Bien, one of America’s most important lithographers, who had finished the lithographs for the octavo edition of Audubon’s Birds of America three years earlier. Each plate is accompanied with the carol lyrics.  The book can be viewed in its entirety online at the Hathi Trust.

From four late nineteenth-century individual titles bound together in 1920 and illustrated with multiple chromolithographs: Forget Me Nots for Remembrance; Star of the East; The Voice of the Christ Child; and: A Christmas Carol  by Phillips Brooks:

Christmas Angels from The Voice of the Christ child. 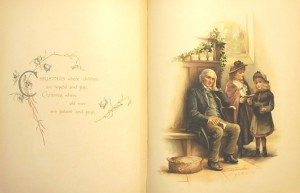 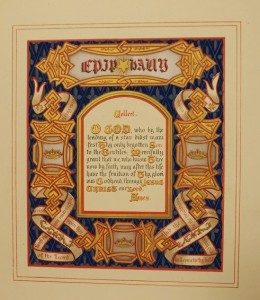