Bring in the Drone! 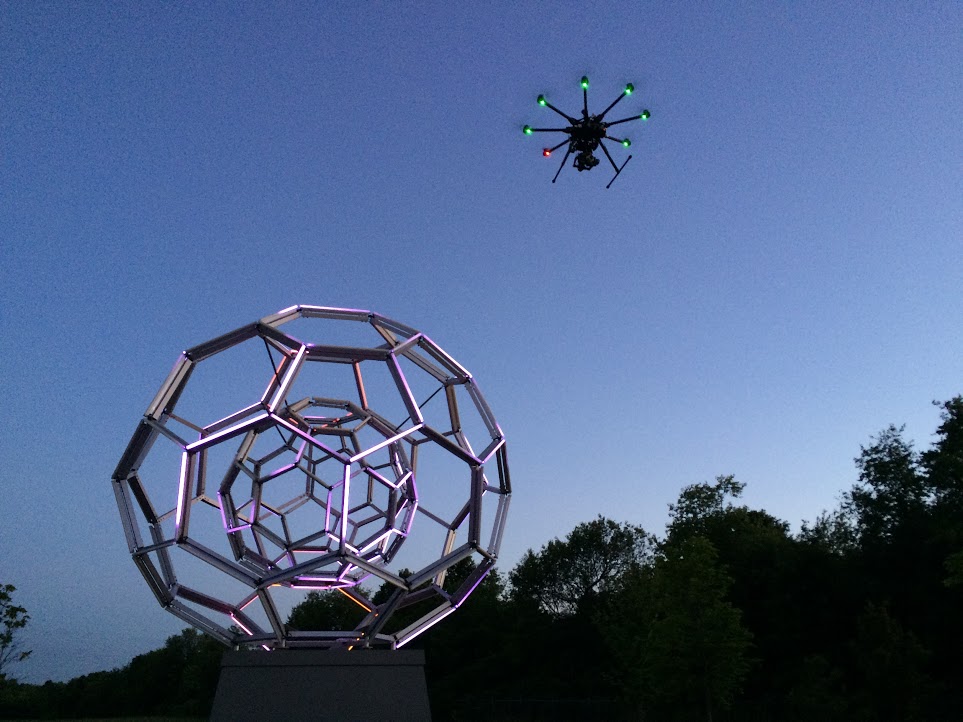 There are a number of locations at Crystal Bridges that offer stunning views of the Museum architecture and landscape.  However, the constrictions of the Museum’s site—down inside a ravine, surrounded by trees—makes it a challenge to photograph in a way that conveys the full scope of the campus.  Back in 2011, aerial photos and video of the site were shot from helicopters that circled over the campus.  But changes have occurred since then, and the landscape has matured and filled in a lot in four years.  It was time for new aerial footage. 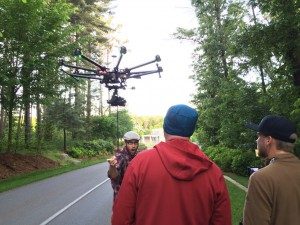 Drone awaiting orders. Director of Photography Derrick Sims is not angry in this photo: you have to shout to be heard over the buzz of the drone!Bring in the drone! New technology in aerial video opens a world of new perspectives on Crystal Bridges from the air. A camera-wielding drone is more maneuverable than a helicopter, and can shift perspective from eye level to bird’s-eye level in moments, adding drama to the footage that was not possible before.

Crystal Bridges brought in Adair Creative Studio to shoot drone-powered video of the Museum from a variety of vistas and in a wide range of light (the shoot began at 5:30 a.m. and wrapped up close to 10:00 pm). The short sample of footage below shows how the drone’s maneuverability creates images that mimic the sense of  “wow” that visitors get when they first first step to the railing at the front entrance and look down to see the hidden sweep of copper roofs, sparkling water, and sharp architectural lines that are the Museum’s hallmarks.

The grounded drone. Minor adjustments and battery changes were required between each flight.

The drone used to shoot this footage is a custom-built DJI “Spreading Wings” S1000 Octocopter packing a camera that shoots cinematic 4K resolution video. The drone is built of carbon fiber, so it’s lightweight—drone and camera together weigh less than the battery pack that powers them.  Flight time on a single battery is limited to 10 minutes, however, so careful planning prior to each shoot is necessary to maximize flight time and ensure that the drone can fly out and then back to its operator before losing power. The shoot required a team of four:  a drone pilot, a camera operator, a director, and a director of photography, all working together to plan and carry out each sweep, and switching batteries out in between.

A host of volunteers and staff members assisted in the shoot, standing in for Museum guests as the filming was done on a Tuesday when we were closed.  The hardest thing about this was resisting the urge to swivel your head and stare up at the thing like a gob-smacked yokel as it buzzed by. It sounds like a really big, really angry bumblebee, and looks like an alien spacecraft (particularly at night).

You’ll be seeing more of this footage in promotional videos and commercial for Crystal Bridges in the year ahead.  And watch the skies this fall:  we’ll be bringing the drone team back to capture the Museum in its autumn glory and to shoot aerial video of the fully completed Bachman-Wilson House! The drone turns its camera back down to the Overlook for a team selfie from the air.