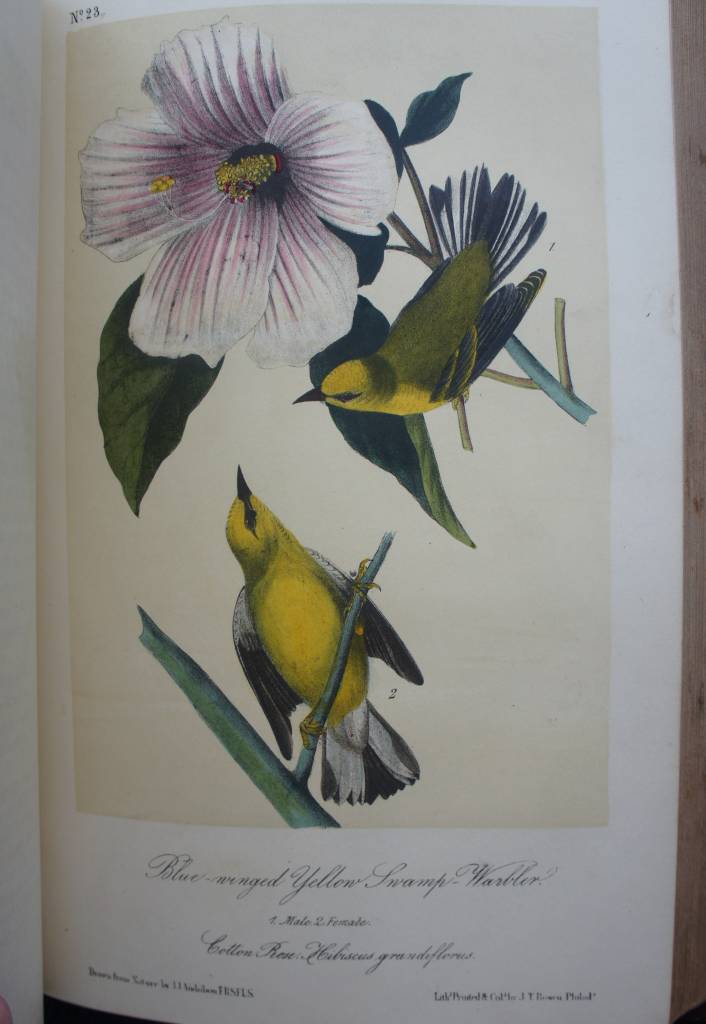 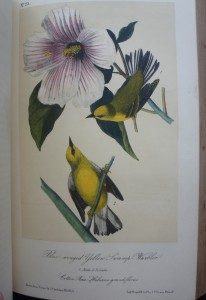 This is the second of the Bird blogs. It’s a way to introduce you, our Museum community, to the Library’s wonderful collection of nineteenth-century American color-plate ornithology books. I call this second entry Big Birds for a couple of reasons, the first of which I eluded to in Early Birds: people recognize the Audubon name—it’s BIG; second, the Audubon publication that folks are usually thinking about, The Birds of America: from Drawings made in the United States and Their Territories, is BIG and the birds illustrated within are BIG!

How BIG? Well, the following is a little lesson in book size (yes, I am going to do it again, refer you to Wikipedia, but it offers a good visual and basic explanation of book size). The BIG Birds of America is a double elephant folio and about 50 inches or 3 ½ feet tall…and the birds are life-sized! 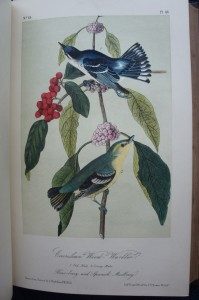 However; let’s back up. The Audubon story is a confusing one but a great opportunity to learn a little about the Audubon family.

The University of Pittsburgh offers a concise history of John James Audubon’s Birds of America published between1827 and 1838. The 435 plates were mostly copperplate etchings after Audubon’s original paintings. The color [watercolor] was laboriously added by hand. This first edition is sometimes referred to as the “Havell” edition because Robert Havell of London completed most of the prints.  Like many naturalist artist/authors, Audubon financed the project by selling subscriptions to wealthy patrons who would receive illustrations every three months in tin cases. At this point in time, there are 120 known complete sets. The value is a result of not only the beauty and the amazingly detailed naturalistic representations in one of the first American color-plate techniques (copper etching and hand colored), but also of the limited first edition printing. 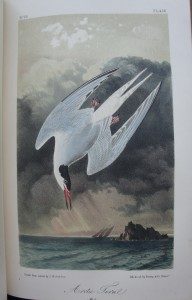 In 1839-1844 Audubon followed the Birds of America double elephant folio with a smaller, more accessible seven-volume octavo edition, The Birds of America, from Drawings made in the United States and Their Territories,  with 500 (more than the double-elephant folio) hand-colored lithographed, (as opposed to copper engraved) plates. Thus, still a highly skilled technical accomplishment, it was a smaller and more widely distributed publication. Nevertheless, a rarity in its own right.

In 1845-28, J.J. Audubon completed The Viviparous Quadrupeds of North America, (birth-giving—as opposed to oviparous (egg-laying—animals): a three-volume, 220 hand-colored etched plates Imperial folio. While it moves away from ornithology, as Willam Reese writes: “Like the birds, the animal paintings have no equal and are still considered the finest animal prints published in America. . .. In size and quality, the largest color plate book project undertaken in the 19th century and one of the best and most important.”

In 1860-61 there was a rather enterprising attempt by J.J. Audubon’s son, John Woodhouse Audubon, to reprint the Birds of America double elephant folio and this edition is rare and valuable for different reasons.  First, it was printed entirely in America by the lithographer Julius Bien seven years after the father, John James’s, death (and is referred to as the “Bien” edition). Second, although originally intended to include all full-scale birds in the original, it was decided to save money by placing some of the smaller birds together on one sheet and is therefore a unique interpretation of the Birds. At the end of the printing there were 105 sheets of 150 chromolithographs, or about one third of the original folio.  The Civil War and collapse of the market eventually ended up forcing the Audubons to sell their own copy of the Havell edition, and the project was considered a complete bust. This is only a sampling of Audubon collaborations so be sure to check Crystal Bridge’s art reference library holdings of over  60 browsable books about Audubon, including a baby elephant folio facsimile of  Audubon’s Birds of America, 1990.

Tips on authentication of Audubon prints