Beyond the Gallery: Creating the Beyond Petite Saison 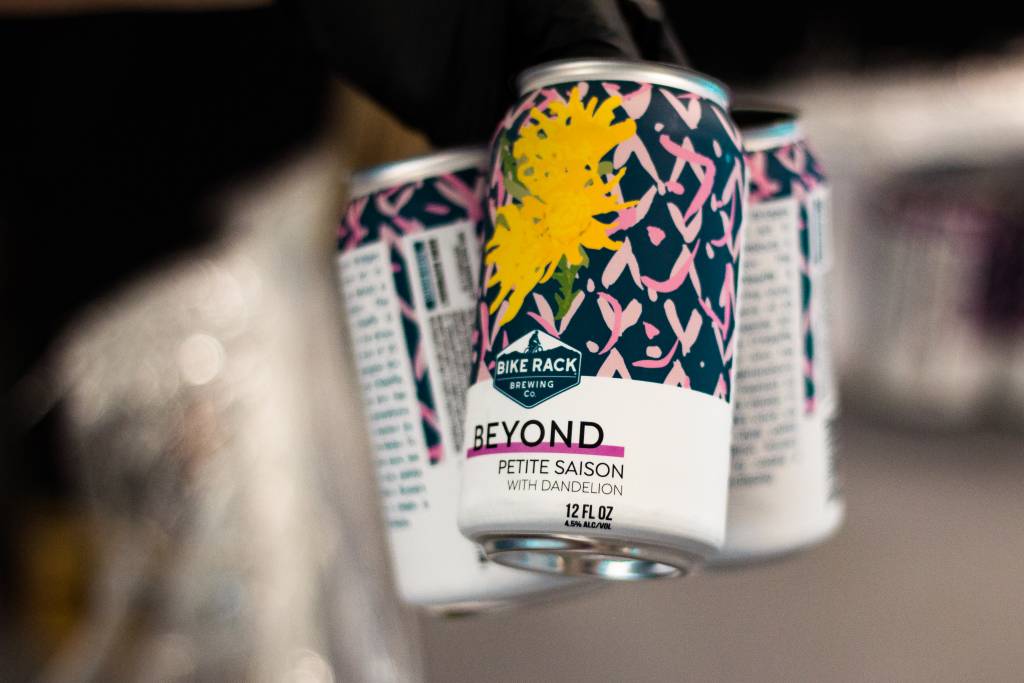 The art itself, with bright colors, organic forms and floral components spurred creative concepts in the brewhouse. The brewmaster, Josiah Moody, was thrilled to start a collaboration in which he could connect the community with locally made beer, while supporting the museum’s exhibitions. “The inspiration I took from Georgia O’Keeffe is that her body of work is both simple and complex. While delicate and intricately depicting the details of the flower, the subject was still a simple, sometimes unadorned, flower,” Moody says. The recipe itself is simple, but the yeast and flower chosen create great complexity. Applying this dual-concept to the beer itself is the approach we took to the project. “We wanted to create a beer both simplistic and rustic, yet nuanced. With that theme, we chose a simple flower—the dandelion—and incorporated it into a petite saison, which is known for its highly complex, champagne-like flavors.” The yeast itself boasts flavors of white grape, citrus, cardamom and bee pollen. These bright and earthy profiles pair with the notes of chamomile and lemongrass that the dandelion adds to the beer.

This beer is meant to reflect the warm season, reminding people of the beauty of plant life and the great outdoors, while igniting their senses with aromas and flavors of spring and summer. “When visiting the Georgia O’Keeffe Museum in Santa Fe, I learned about her life, what she enjoyed and what she stood for. She was woman determined to follow her heart and passion into the city, whose farm roots yearned for a connection to nature,” says O’Brien. Georgia O’Keeffe spent time retreating in New Mexico, spending time in the pristine mountainside, gardening and enjoying the natural splendor. The Bike Rack team realized that creating a beer that has both the aroma and feeling of gardening in the springtime would capture Georgia O’Keeffe’s organic style of art, while showcasing the botanicals of spring and summer in Arkansas. The recipe itself was inspired by O’Keeffe’s work, yet the can art was inspired by the contemporary artists that are featured in the exhibition. The can was designed by Jullian Wilson, who covers social media and marketing for Bike Rack Brewing Company, with the input of the Crystal Bridge Creative Team. The designers decided to pull in influences from the contemporary artworks in the exhibition. Anna Valdez, an artist out of San Francisco, tries to focus her still lifes on cultural meaning and her life journey in a globalized society. “Looking at two of Valdez’s still-life paintings, Deer Skull with Blue Vase and Studying, I knew I wanted to play off of her use of color and vibrant patterns,” said Wilson, “yet, I knew I needed a clean, simple element to the design to compliment the exhibition’s entirety.” While considering the simple elegance of O’Keefe’s work with the vibrant, playful designs in Valdez’s work, Wilson completed a whimsical design with a matte finish, showcasing a dandelion with a pastel pattern that wraps around the can. The colors used in the can design are pulled from Valdez’s Deer Skull with Blue Vase, which is also featured on The Beyond coasters. “It has been an honor to work with the Crystal Bridges team and have a part in celebrating Georgia O’Keeffe and other upcoming artists,” concludes Wilson. The cans will be available at Crystal Bridges, and there will be six-packs for purchase at Bike Rack Brewing Company starting June 10th during their Beyond Release Party with Chef McCormick from Eleven. 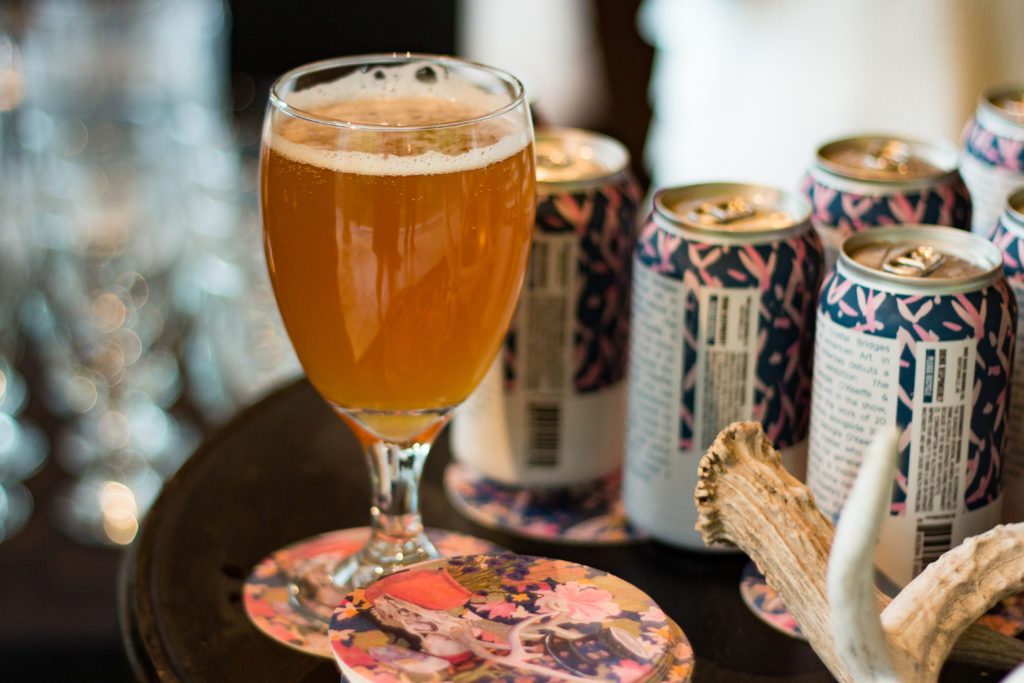 This beer will also make special appearances at the June 14 Local Beer & Food Night at Brightwater: A Center for the Study of Food with Chef William McCormick, which will feature a night of tasting small plates and beer while discussing the flavor interactions; purchase tickets at nwacc.edu/public.

Learn more about The Beyond: Georgia O’Keeffe and Contemporary Art, on view through September 3, at crystalbridges.org/okeeffe

“Just one of the great cultural byproducts of Crystal Bridges is the inspiration it has on the community and public at large – the ripple effect of art, architecture, and nature is never more evident as when an artisan from the community devises, designs, and creates something that was sparked from the museum; and Bike Rack has truly manifested inspiration incarnate in a delicious, refreshing petite saison that could only come from the O’Keefe legacy.” 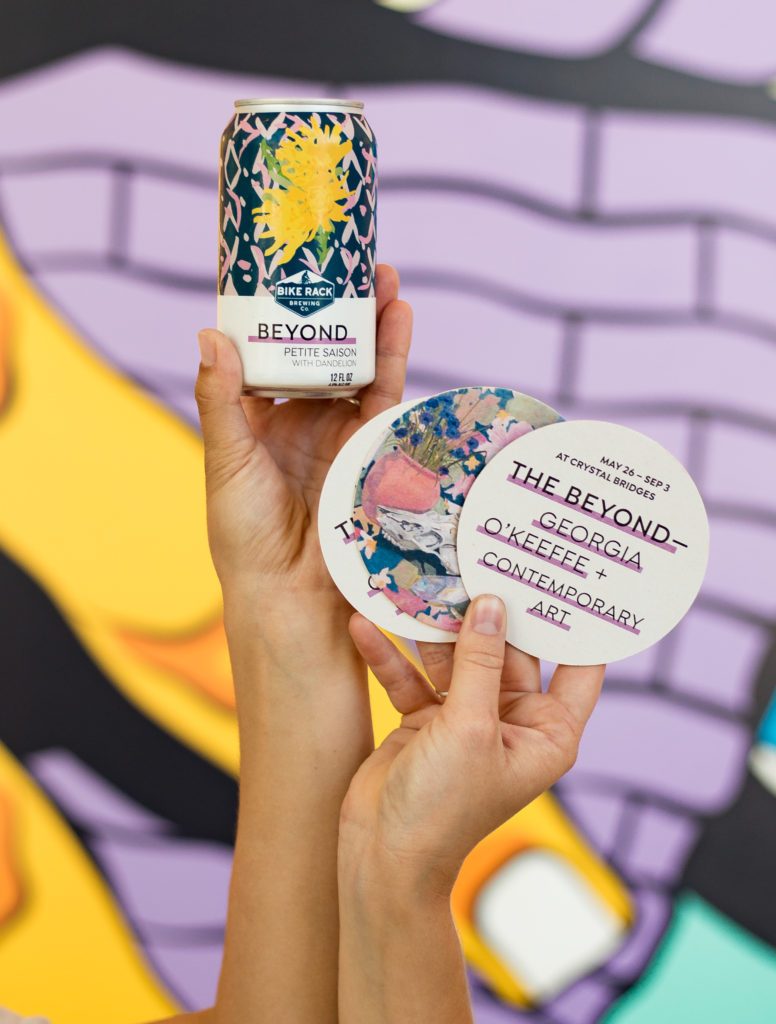