How It All Began: Alice Walton’s Watercolors 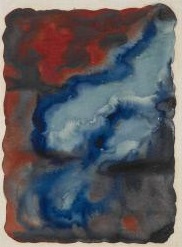 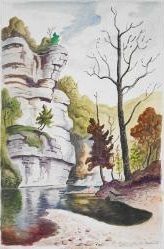 Thomas Hart Benton, “Buffalo River,” 1968, Watercolor and pencil on paper mounted on board

While exploring Crystal Bridges, guests encounter a wide variety of artworks ranging in scale, style, and media, the creation thereof spanning roughly five centuries. From James Wooldridges’s seventeenth-century depiction of Native American culture to Leo Villareal’s LED light sculpture towering 30 feet in the air, the galleries and grounds present a wonderful overview of art in the context of American history. And it all began with one woman’s love of watercolor.

Museum Founder and Board Chair Alice Walton’s initial interest in art began many years ago when she discovered the delicate beauty of watercolor.

“As a child, my mother and I painted watercolors of nature during our travels to our country’s magnificent national parks,” she explained. “I was a frustrated painter. I knew I could never capture the beauty and inspiration of the American land, but I tried my best.” 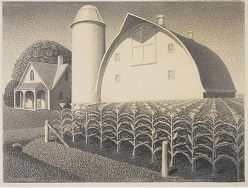 Grant Wood,
“Fertility,” 1939
Charcoal on board

Eventually, Ms. Walton put down her brush and began collecting watercolor paintings by regional artists. She also spent a deal of time researching various artists and their cultural significance.

By the late 1980s, Ms. Walton’s fondness of art, paired with her ever-increasing fascination with art history, inspired her to begin collecting works on paper by artists such as Thomas Moran, Andrew Wyeth, and Georgia O’Keeffe.

“When I discovered the great masters of American art history and their watercolors, I understood the wide gap between what I could do and what our greatest artists have achieved,” said Ms. Walton. “It made me want to live with their inspiration, and that’s what I began to collect.” 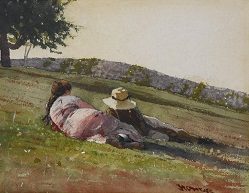 In the beginning, Ms. Walton primarily collected nineteenth-century paintings by realist artists like John Singer Sargent and Winslow Homer, but as she read more, she developed an eye for modern and contemporary art as well. Ms. Walton began to explore how art evolves as societies and cultures change. This general interest in American culture and history inspired her to expand her collection, so she began acquiring works by artists in many media.

In 2005, Ms. Walton’s desire to share these masterworks with the public took her far beyond her role as a collector when she, along with the Walton Family Foundation, founded Crystal Bridges Museum of American Art. 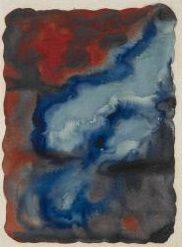