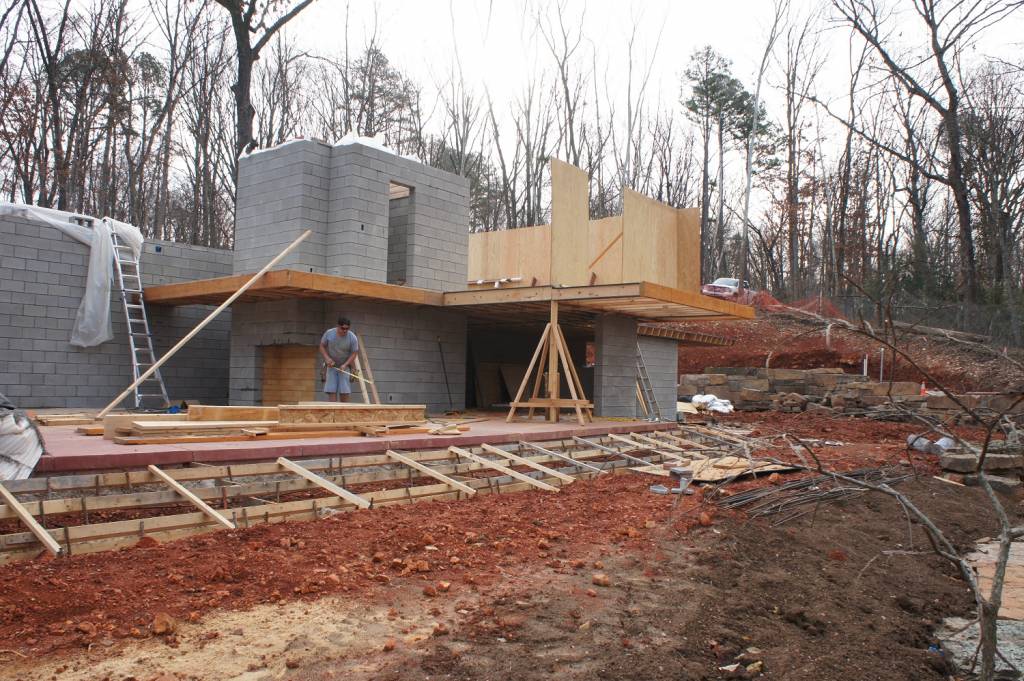 A view of the back of the Bachman Wilson House under reconstruction. This side will have floor-to-ceiling windows and a view of Crystal Spring. 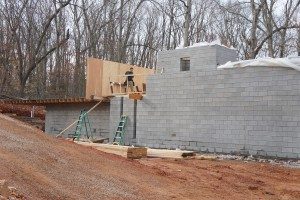 Anyone who has visited Crystal Bridges’ South Lawn in the past few weeks has observed the back wall of the Bachman-Wilson House as it has gradually risen into view over the construction fence. It may have been something of a let-down, as this gray, cinder-block wall does not have much of a “Frank Lloyd Wright” flavor… yet.

This week, that will begin to change. 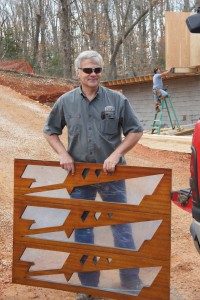 Late last week, the re-construction crew headed by contractor Bill Faber began to install some of mahogany frames for the clerestory windows on the structure’s second floor.  As these wooden structures begin to go in, the building will become more recognizable for what it is:  a classic Usonian home by Frank Lloyd Wright. 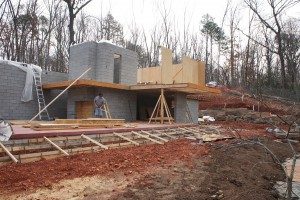 A view of the back of the Bachman-Wilson House under reconstruction. This side will have floor-to-ceiling windows and a view of Crystal Spring.

The windowless back wall of the house (excepting the narrow clerestory windows high up on the wall) is meant to assure privacy for the home’s inhabitants. The home’s apparent front is actually its back—its glass-walled face is turned toward the natural environment behind it:  in this case, the waters of Crystal Spring that flow through the ravine just below.

However bland this concrete-block wall may seem at first glance, take a closer look and you’ll discover the elegance of the architect’s design and the workmanship of the crews who are reconstructing the house. The blocks are very precisely aligned to form strong horizontal lines across the structure.  These lines continue through the interior of the house, and can be especially appreciated in the way the fire brick inside the fireplace lines up perfectly with the mortar lines of the concrete blocks, maintaining unbroken horizontal bands throughout the home. The precision of construction also applies to the floor: the joints between the 4-by-4-foot concrete floor panels line up perfectly with the vertical mortar lines of the cinder-block wall. 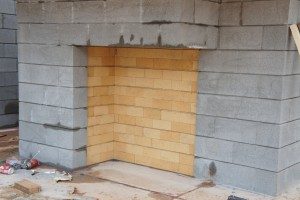 The fireplace in the home’s interior. Note that the horizontal lines of fire brick and structural concrete blocks line up precisely. 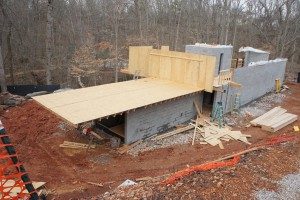 Now that most of the structural work is done, with the exception of the roof, the real work of piecing together the hundreds of disassembled components of the original house begins in earnest. It’s considerably more complicated to reconstruct a house than it is to construct it from raw materials in the first place:  as they are building, the contractors have to figure out exactly how each piece was positioned, how it fit with surrounding pieces, and how each segment was built in the first place.

You could think of it sort of like a giant three-dimensional puzzle the construction crew is putting together based on the original architectural drawings, notes taken by the contractors who first build the house, drawings and notes by the Tarantino family who restored it, and hundreds of photographs taken from (almost) every conceivable angle of the house in its original location.

“You think you’ve taken pictures of every possible thing,” Faber quipped. “Then you’re scratching your head trying to figure out something that you just missed getting in a photograph.”

Faber has been on the site of the Bachman-Wilson House nearly every day since the reconstruction began, and sees it as both a fascinating challenge and a labor of love. It’s a once-in-a-lifetime opportunity for this contractor who started his career as a master carpenter, specializing in elegant trim work. He brings that attention to minute detail to the Bachman-Wilson House project; Faber is committed to accurate reassembly of the home to a level of detail that includes re-using original nail holes in the board-and-batten interior walls and ceilings. 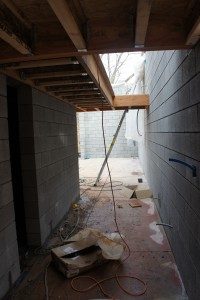 A view from the front door of the house down the low-ceilinged hallway toward the open living area. Note the narrow bathroom door to the left.

Walking into the house in progress gives some perspective on just how compact and spare the space is.  The door to the first-floor bathroom is barely wider than my shoulders, and much more narrow than any standard modern door.  The hallway is similarly close, and the ceiling in the kitchen and first-floor bedroom is low enough for visitors to the house to get an up-close look at that board-and-batten construction I mentioned.

“It’s all about constriction and release,” explained Eccleston. “The house was meant to give you an initial feeling of security and embrace which then opened up into a sense of expansion and openness as you moved into the living room.”

You can see more about the history of the Bachman-Wilson House project at Crystal Bridges here.