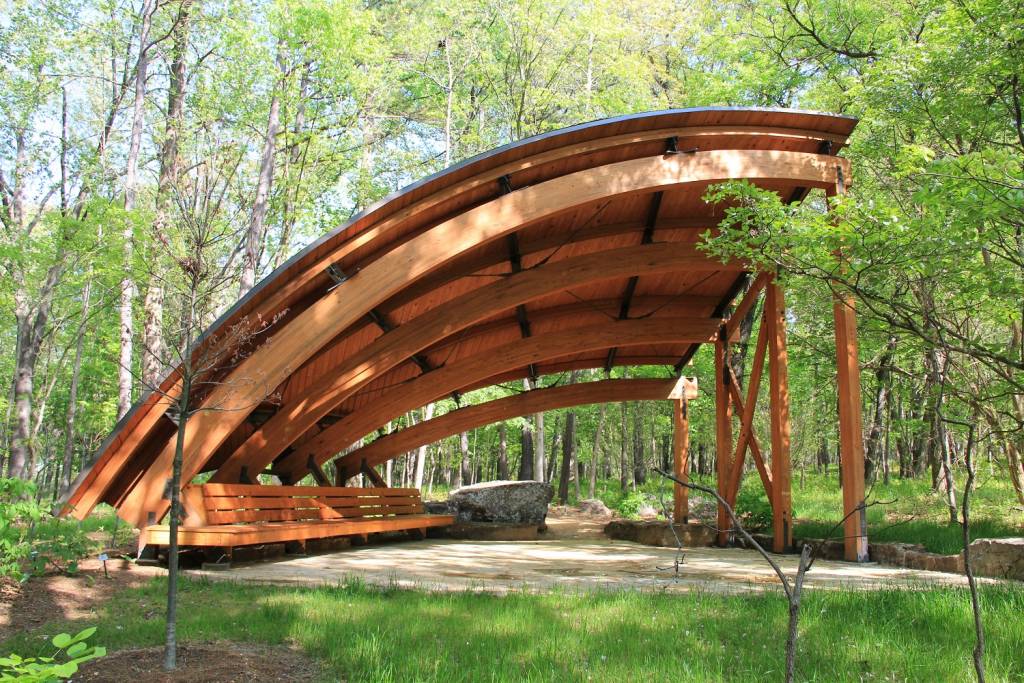 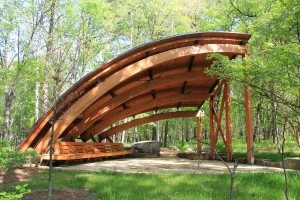 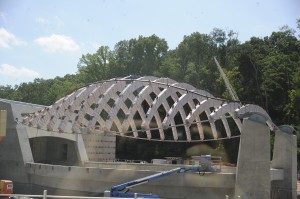 This photo from July, 2011 shows the glue-laminate beam and cable structure of the roof of the Museum’s Great Hall.

For those who frequent the trails and attend programs on the Museum’s grounds you may be familiar with the unique structure located on the Tulip Tree Trail about 300 yards south of the Museum.  The history of this shelter is as interesting as its shape and affords guests with interest in nature as well as architecture to appreciate its function and design. At first glance one might not recognize the similarities in shape and materials the structure shares with a specific building of the Museum. The unusual design is due to its original function as a mockup for the roof of the Great Hall. The organic inspired structure was produced as a full scale, quarter sectional replica (the precise section is the southwest quarter of the Great Hall). Modeled from the original architectural design by Moshe Safdie the mockup was built in 2010 by the joint venture of construction companies Linbeck Group LP from Houston, Texas and Nabholz Construction Company of Conway, Arkansas. Composed primarily from southern yellow pine the curved beams are the signature feature of the shelter.  Known as Glu-lam, the structural beam is comprised of a number of layers of dimensioned timber bonded together with durable, moisture-resistant structural adhesives to produce one large beam. The beams are then steamed and shaped to produce beautifully crafted arches.  Unit Structures, LLC in Magnolia, Arkansas fabricated the glue-laminated beams for the Museum. 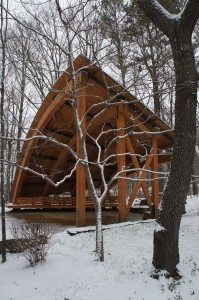 Upon the Great Hall’s completion the mockup was no longer needed and was going to be dismantled and destroyed. That was until Director of Grounds and Trails, Scott Eccleston, saw the opportunity to repurpose the structure as a covered shelter for guests as they explored the trails. With assistance from a local family, the Havners, the replica was saved from scrap and plans were made to relocate the structure to an appropriate site.  Situated on a level surface off of the Tulip Tree Trail flagstone from Winslow, Arkansas, was laid as a foundation for the new shelter and the structure was reassembled. A seamless metal roof was applied to preserve the wooden structure and the Tulip Tree Shelter became a part of Crystal Bridges Museum.  So next time you visit the trails pack up a picnic and enjoy the natural setting surrounding the Tulip Tree Shelter and explore the architectural features of the structure and discover part of the process of the Museum’s construction.