An interview with artist Jack Whitten 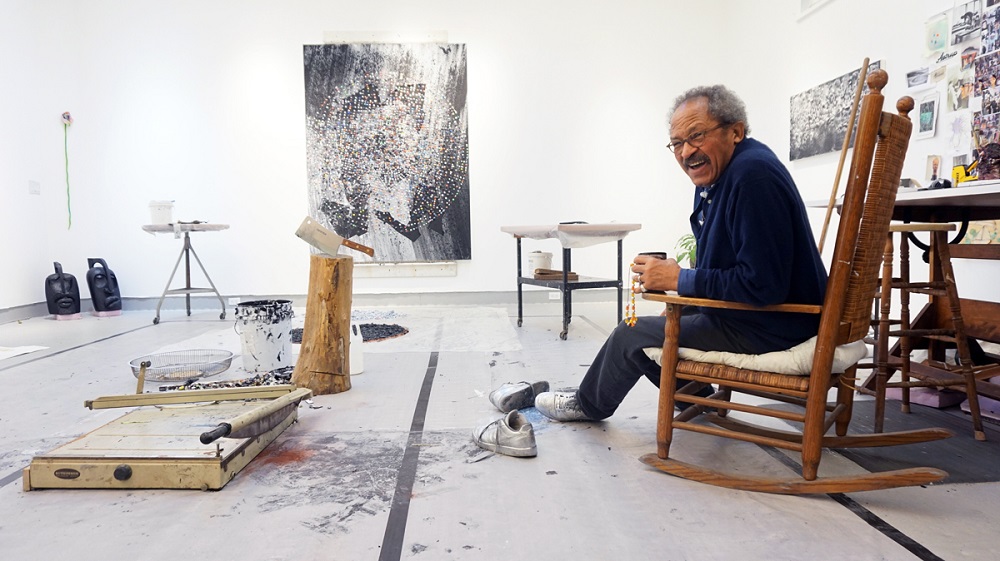 Jack Whitten in his studio, 2015. Photo by Katherine MacMahon

The team here at Crystal Bridges was saddened yesterday to learn of the death of Jack Whitten, American abstract artist. Whitten began his career making large-scale works for which he used a modified squeegee or rake to move paint around the surface of a canvas placed on the floor. But in more recent years he had taken his fascination with paint to a whole different level. He would create mosaics whose “tiles” were layered and dried squares or circles of paint, affixed to canvas in a classic mosaic style to create works that were rich in texture, color, and concept. He was awarded the 2015 National Medal of Arts by President Barrack Obama.

Two of Whitten’s works from the 1970s will be on view at Crystal Bridges as part of Soul of a Nation: Art in the Age of Black Power, opening February 3 (Including Homage to Malcolm, 1970, below).  In preparation for the exhibition, Crystal Bridges reached out to all of the living artists whose work is included in the exhibition, asking if they would be interested in participating in a national symposium, which is taking place the weekend before the public opening.  Though Mr. Whitten was not able to make the journey to Crystal Bridges, he was generous enough of his time and effort to answer a number of questions I had sent to him by email.  Below are those questions and Mr. Whitten’s responses, in their entirety.

You have talked about getting “beyond notions of race and gender” in your work; how do you think you can you communicate that in the tense racial environment we’re currently experiencing?  What does it take to get beyond those notions?

Race is a political fabrication. There is no scientific biological fact that supports the notion of race. We all carry the same DNA pattern. The obsessive fetishistic emphasis on race in America has become a sickness. Who wants to be sick? All of us, both Black and White, must learn to cure ourselves. Your question is complex. There is no simple answer.

Gender is no longer simply Male/Female, nor has it ever been. It is good that public awareness has become activated to the richness of gender diversity. Gender defines who we are, it serves as a foundation in building personal identity. Without a firm foundation on who we are sexually, our identity will remain a rootless spirit-draining drag.

My use of the word “beyond” offers a clue to the metaphysical dimensions of this problem. Metaphysics is at the core of my practice, it works for me, but I’m not sure of its application on a mass public level. I have only my paintings to offer.

You have said that you don’t have the optimism you had 40 years ago, but that art is the only hope. Can you talk about the hope art offers?

I was born in 1939 in Bessemer, Alabama. My experience is one of American Apartheid. Hope and Faith that things would get better was all we had. The older folks would say “their kids will be better.” This has not proven to be the case. America today is a spiritual wasteland and our belief system has become a political football. Yes, the past 50 years have dampened my optimism. The same evil political acts witnessed as a child have continued today, very little has changed. America has barely changed its attitude on race, economics, gender, etc. Only art is open to change. It is the artists who must “test” everything in society. This testing is what gives us freedom.

I understand that after participating in the march on the capitol in Baton Rouge you decided not to join in peaceful protests any more, and in fact you threw everything you had into the lake and left the south.  Can you talk about that decision? How did that impact your work?  What did you feel your role was in regards to the Civil Rights movement after that point?

I was a witness to the extreme hate and violent reactions from White people on that march. I met Dr. King in 1957 during the bus boycott in Montgomery. I believed in him and was deeply moved by his strategy of nonviolence. My beliefs were tested in Baton Rouge in the Spring of 1960. I honored my pledge of nonviolence throughout that march. The lesson I learned was this: theory is different from action. I made a practical decision to leave the South: I knew that if I stayed then I would eventually kill someone, or somebody would kill me.

The impact of my decision was immediate, it drove me deeper into art as salvation.

You do a lot of reading that seems to inform your work, particularly about innovations in science.  What subjects have most inspired you and what are you reading and thinking about now?

I try to keep up with what’s happening in the scientific community the best I can. I recently read The Quantum Moment by Alfred Scharff Goldhaber and Robert P. Crease. My recent show at Hauser & Wirth was inspired by this book.

Currently I am reading Representation And Reality by Hilary Putnam, it has been helpful in clarifying present philosophical theory. Academic deconstructionists and their overzealous attempts to debunk anything smelling of structuralism have caused a lot of confusion. It is refreshing to read how Putnam proceeds to critique himself and make significant changes to his thinking. We need more of this.

As an artist, how did you see your role in the Civil Rights and Black Power movements in the 1960s and ’70s? How did art impact those movements?

The legacy of W.E.B. Du Bois is founded on the necessity of aesthetics. With a firm structural construction of aesthetics, anything is possible. There would not be “the artist Jack Whitten” without the benefit of Du Bois’ legacy. All Black artists are aware of the impact of slavery on our culture. Slavery destroyed our culture. I believe that Black artists can reconstruct our culture. Not only can we reconstruct our culture, but we are in a position to exert influence on a global scale. Art is organic and therefore it operates within the same principles of evolution: it evolves like all organic structures.

The Civil Rights and Black Power movements of the 1960s were an important part of my search for identity. They gave me the foundation to build my personal aesthetics. The power of art is not simplistic. Art moves in mysterious ways.

What is the role for art and artists in the racial problems happening in America now?

All art is about perception. Concentrate on perception. Change the perception and reality changes. Painting is a language. Translation is difficult. The translation of my work for practical application in solving social problems has bugged me throughout my career. I am not a social worker. I am not a politician. The answer is in the paint. I know this because I put it there. Do you feel that Black artists today have an obligation to represent the Black experience directly in their work?  Why or why not?

I do not speak for other artists and I do not believe in the imposition of obligations of any sort. Art is whatever the artist wants it to be. If you are honest, and work both without outrageous speculations of self or the denial of being, then your sensibility will be shaped by the Black experience. For me, the Black experience is compressed into paint as matter. I do not depend on narrative.

Is it important for audiences to know an artist is Black?  Has your attitude about that changed over the course of your career?

Yes, the public should know that a Black person did this painting. I do not believe in the vulgar notion of placing a red, black, green ribbon next to the painting! I am very firm and consistent on this. The autobiographical sources of a work of art enhance the viewer’s interpretation. Make this information available to the public on an equal basis, as with all objects of art.

What are you working on these days?   What inspires you or informs your work?

I have just completed another in my series of Black Monolith paintings, this one honors the rock n’ roll master, Chuck Berry. Like Chuck Berry, it is wild! I have a show opening in London 26 September 2017 at my gallery, Hauser & Wirth. Plus, we are in the planning stages for a major show of my sculptures, curated by Katy Siegel, opening at the Baltimore Museum of Art in the Spring of 2018.

Art should reflect the period in which it’s made. We live in a modern technological society therefore I pay close attention to what’s happening in science. Particle physics, astrophysics, quantum mechanics, nanoscience all fire up my imagination. Jazz is the soul of my practice. Jazz is a philosophy….it means the expansion of freedom: when freedom expands, consciousness expands. Philosophy, the history of art, and on the fun side, fishing!

If you could tell your younger self anything, what would it be?

I am my younger self and my instincts have proven to be correct for more than forty years.

What would you like your artistic legacy to be?

An innovator who changed the course of western abstract painting.