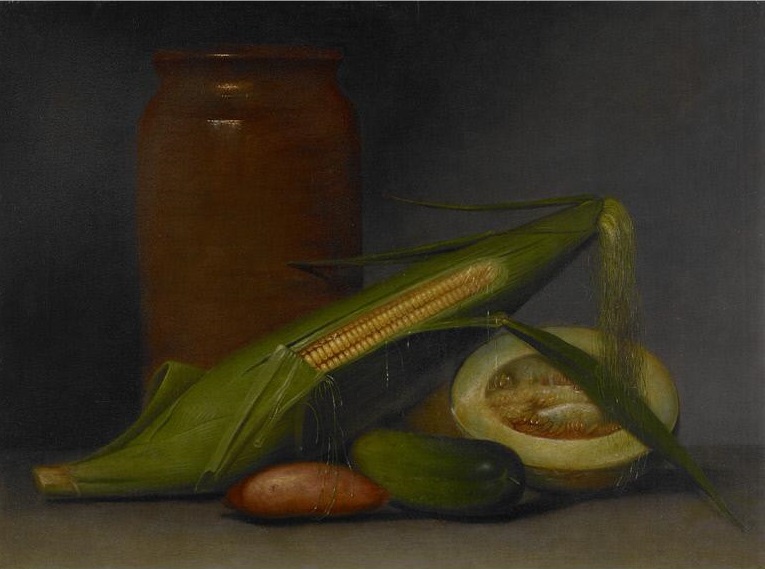 Today Crystal Bridges opens American Encounters: The Simple Pleasures of Still Life, the fourth and final exhibition in a series created in a four-year collaboration between Crystal Bridges, the High Museum of Art in Atlanta, the Terra Foundation for American Art in Chicago, and the musee du Louvre in Paris, France.  In this second installment of her post about the exhibition, Curator Manuela Well-Off-Man looks at the uniquely American take on the genre. –LD

American Offshoots Still-life painting took root in America during the early 1800s. Previous to that time, still life as an art form was almost non-existent in the American art world. The earliest pre-nineteenth-century examples were often limited to illustrations such as beautifully rendered botanical studies in publications, minor emblematic details in portraits, including a skull in Thomas Smith’s Self-Portrait (c. 1680, Worcester Art Museum), or interior decorations. Still life as independent subject “would have been considered frivolous” by Puritans in colonial times.[i] Furthermore, in the European art academies, still life was considered the lowest of the genres after portraits, history, and landscape—which explains why still-life painting lead a wall-flower existence for such a long time. 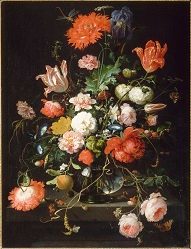 Beginning in the early 1800s, American artists who studied abroad brought back European still-life influences. However, they developed their own approach to still-life painting by selecting objects that were typically American; and they adapted their style and composition to fit American taste. The first American still lifes were modest in scale and in subject, often focusing on products cultivated on American soil. While European artist Abraham Mignon painted in an opulent style and alluded to the vast international trade of the Dutch Republic in his floral bouquet full of exotic plants—American artists often used native plants to express national pride. 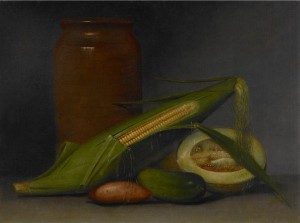 Raphaelle Peale was considered one of America’s first painters of still lifes. He appropriated the traditional European format of the small tabletop still life to highlight humble, classic American products such as corn, yams, and cantaloupe, celebrating the fertile American soil.  The fruit and vegetables Peale selected for his Corn and Cantaloupe (ca. 1813) grew in his birth state, Maryland. It was probably no coincidence that these were also the staple crops of the plantation belonging to the painting’s first owner, Dr. Benjamin Lee from Maryland. The cantaloupe has been identified as an Anne Arundel melon, which only grew in certain parts of Maryland at that time—Peale was born in Anne Arundel county, so the fruit may have been an autobiographical reference, similar to the “P” formed by the husk and silk of the corn. Sweet corn was considered a distinctly American crop.