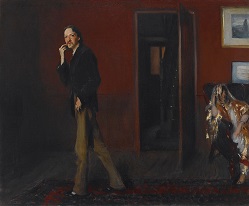 October is a festive and mystical month.  Summer days shorten and the dark of night arrives earlier.  Brisk winds carry the sounds of falling leaves and the faint smell of smoke from fires roasting s’mores and heating homes.  A harvest moon rises overhead—our senses are heightened with the unfamiliar noises of nocturnal creatures.  It is the perfect natural ambiance for the Halloween season.  If you, like myself, delight in this haunted holiday, then allow me to share with you some creepy content about one of the works that hangs in our galleries… 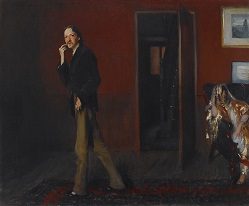 If you find yourself in the Late Nineteenth-Century Art Gallery at Crystal Bridges, cautiously approach John Singer Sargent’s masterpiece, Robert Louis Stevenson and His Wife, and inspect it carefully. This unique painting has captured the attention of guests and art historians alike for its curious portrayal of the famed Scottish author and his bride. Painted during one Sargent’s visits to the Stevenson’s residence in Bournemouth, England, this peculiar portrait was presented to the couple as a gift by the artist.  Though a bit puzzled by the unusual work at first, the Stevensons eventually grew to appreciate it.

The painting’s asymmetrical balance, the subject’s agitated stride and engaging gaze, combined with the unusual cropping of the female form, intrigue the viewer to discover what Sargent was attempting to convey. While we may never know Sargent’s exact intent, there are haunting histories that surround the subject of this painting which have continued to inspire stories and characters in literature, cinema, and urban legends retold during All Hallows’ Eve. 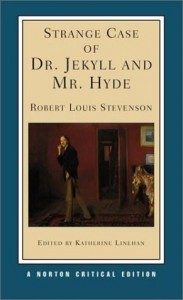 The subject, Robert Louis Stevenson, was the celebrated poet and author known for his adventurous novels such as Treasure Island and Kidnapped. In 1885, when Sargent finished the painting, Stevenson was completing his most recent work:  a novella titled Strange Case of Dr. Jekyll and Mr. Hyde.  (The original publication lacked a “The” at the beginning) Some art historians have pondered if Sargent may have inadvertently captured in his painting the author contemplating his sinister character, Mr. Hyde. The novella was published in 1886 and was widely popular.  A stage adaptation of the story was presented at London’s Lyceum Theatre in 1888, featuring Richard Mansfield in the title roles. 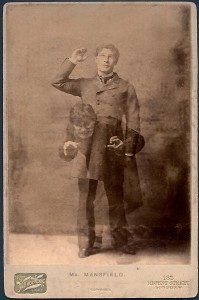 A publicity portrait of Richard Mansfield in his famous role as Jekyl/Hyde. From Wiki Commons.

The play was well received, however—shortly after the theatre production opened, the East End of London began to be terrorized by what would become known as the “Jack the Ripper” murders. The theatrical production at the Lyceum Theatre found itself the focus of unwanted attention as well as serious interest from investigators of the Whitechapel killings, though no link was ever established. The main character in The Strange Case of Dr. Jekyll and Mr. Hyde was believed by many of the London locals to be a potential inspiration for the crazed person responsible for the Whitechapel murders. Coincidentally, the play’s closing night—Saturday, September 29, 1888—was the same night as “the double event”—the murders of Elizabeth Stride and Catherine Eddowes, committed just 45 minutes apart in the wee hours of the morning, by Jack the Ripper. 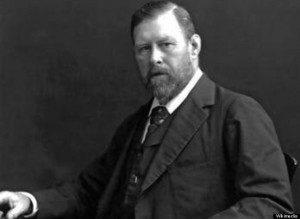 As if this were not enough bone-chilling coincidence to give you goose bumps, there is one additional frightening fact to this twisted tale. The young theatre manager of the Lyceum was intensely affected by the production and heinous crimes. Nine years later, the Irish-born lad would develop his own menacing character based on historical events and would compose a Gothic horror novel which would influence countless tales of terror for generations to come. The theater manager was Abraham “Bram” Stoker, whose original novel, Dracula, would receive universal acclaim and continues to inspire the spirit of the season today.