A Canvas for an Architectural Masterpiece 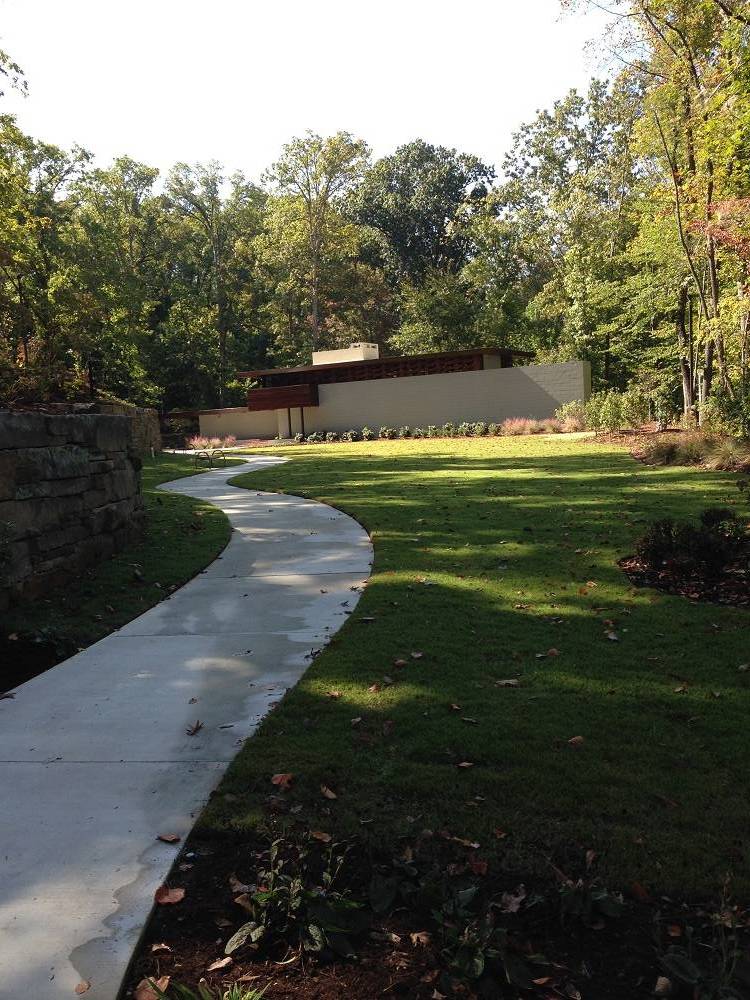 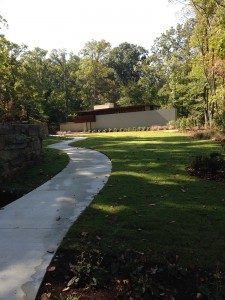 As the reconstruction of the Bachman-Wilson House at Crystal Bridges wraps up, final touches are also being applied to the landscape surrounding the house.  The Trails and Grounds crew has been working for months to create a landscape for this classic Frank Lloyd Wright house that integrates the house with the grounds of Crystal Bridges, remains true to Wright’s principles and the intended environment for the home, and also gives a nod to the house’s history and roots.

“The goal for the landscape is for the visitor to feel like you were transported back to 1955,” said Scott Eccleston, Director of Facilities and Grounds. “Before you get to the entry pavilion, the landscape needs to feel very much like Crystal Bridges, but once you come through that entry, it will be a whole different feel.”

The Bachman-Wilson House is situated on approximately two acres of land reclaimed from the steep hillside. A rock retaining wall more than 200 feet long has been built to hold back the forested slope to the east. This wall is the same in texture and style to other such walls on the grounds and will serve as the visual connection to the Museum. A dense planting of ferns, flowering trees, and evergreens to the west will screen the view of the Museum from the house, giving a sense of intimacy and enclosure.  Between that living wall and the rock wall to the east will be a wide expanse of green lawn. 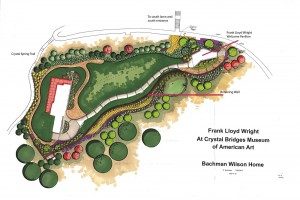 Landscape plan for the Bachman-Wilson House at Crystal Bridges

“We had to come up with a way to integrate what is essentially a suburban house with the Museum and the forest, so we decided to add the canvas of the lawn,” explained Eccleston. “Lawn is definitely suburbia. Suburban planting was very simple in the 1950s.  The lawn was the park, the play area, the outside congregation area. And we wanted it to be like a river of green grass that would just float you to the house.”

That’s not to say there won’t be plenty of color in the plan.  The retaining wall to the east is, as Eccleston says: “a landscaper’s dream. The wall is head-height and the landscape is on a slope, tilted toward the viewer. It doesn’t get any better than that. It’s the perfect canvas for a landscaper and we are going to make the best of it.”

This area is being planted with a riot of native plants, including azaleas, coneflower, ruby slipper, and hydrangeas, among others, all positioned against the background of the forest with the addition of flowering trees such as dogwood and redbud. When the landscape plan is fully implemented, 20 different species of trees, shrubs, and perennials will have been planted, for a total of about 10,000 plants on the site.

Up on the hillside above the retaining wall, the team is making plans for a future picnic area that will overlook the Bachman-Wilson House and grounds, complete with tables and a landscaped trail that connects the Tulip Tree Shelter with the house. The grounds crew is also working on an after-hours lighting plan that will transform the area in the evenings, using light to highlight the textures of the wall and plantings. Eventually the lights will extend along the trail all the way to the Tulip Tree Shelter, making it another gathering place for visitors after dark.

“My goal is to have the house, the wall, and the landscape so integrated that you can’t think of one without the others,” Eccleston said. “It will be a destination spot within the Museum grounds.”