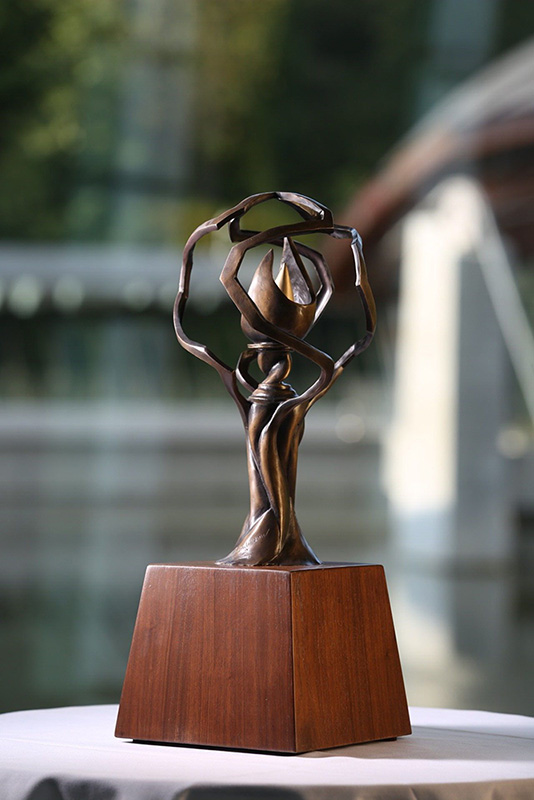 BENTONVILLE, AR — Crystal Bridges Museum of American Art announces that the Archives of American Art, Smithsonian Institution, Washington, DC, has been selected as the first recipient of the Don Tyson Prize, a $200,000 award for outstanding achievement in American art.

“With more than 20 million items in its continually growing collections, the Archives is the world’s largest and most widely used resource dedicated to collecting and preserving the papers and primary records of the visual arts in America,” said John Tyson, Chairman of Tyson Foods. “My father, Don, for whom the prize is named, was a big believer in education, American history, and the American spirit. This type of accolade for the work being done to further American art would have been very meaningful to him.”

“We’re grateful to the Tyson family and Tyson Foods for their support of the mission and vision of Crystal Bridges, and their commitment to advancing the understanding of American art,” said Crystal Bridges’ Board Chair Alice Walton. “I was honored to count Don Tyson as a friend, and the legacy now being established through the Tyson Scholars program and the prize bearing his name carries on the Tyson family’s significant tradition of philanthropy.”

“We are enormously honored and humbled to have been chosen for the inaugural Don Tyson Prize,” said Kate Haw, Director of the Archives of American Art. “This recognition from the Tyson Prize jurors and Crystal Bridges, which itself is doing such important work to advance our field, is very gratifying to our creative and committed staff, who have worked for more than 60 years to collect and share the riches of the Archives for all those who are interested in American art.”

In 2012, Crystal Bridges received a $5 million endowment from the Tyson family and Tyson Foods, Inc., to establish the Tyson Scholars of American Art program and the Don Tyson Prize. Tyson Scholars is a research and residency program that helps promote the study and understanding of American art. Tyson Scholars have access to the art and library collections of Crystal Bridges, as well as to the museum’s curatorial and research staff, plus opportunities to interact with the community through lectures, symposia, and collaborations. Since its inception, the program has supported the work of 15 scholars, attracting museum and academic professionals in a variety of disciplines from across the world.

The prize, recently endowed with an additional $5 million commitment from the Tyson family and Tyson Foods, Inc., was named in honor of the late Don Tyson, former chairman and CEO of Tyson Foods. The Tyson family’s interest in American art began with Don Tyson’s love of traditional American-Western art, which he began collecting in the 1960s.  His son John Tyson, current chairman of Tyson Foods, is also an avid collector, and has significantly expanded and diversified what has now become the Tyson Foods corporate collection. He is also a member of Crystal Bridges’ board of directors.

“We are pleased to honor the Archives of American Art with the first Don Tyson Prize,” said Crystal Bridges’ Executive Director Rod Bigelow. “Their impressive collection and commitment to providing access to the history of American art parallels the museum’s own vision to provide access to great works of art and the stories of America they share.”

Tyson, along with Crystal Bridges Board Chairperson Alice Walton, will present the $200,000 prize to the Archives of American Art at an event to be held in Washington, DC, on October 21. An award created by artist Troy Anderson (a bronze sculpture titled Forged from the Earth) will be presented to the Archives as well. A high-res image of the award is available for download here.

For more information about the event, please contact Beth.Bobbitt@crystalbridges.org.

About the Archives of American Art

Founded in 1954, the Archives of American Art fosters advanced research through the accumulation and dissemination of primary sources, unequaled in historical depth and breadth, that document more than 200 years of the nation’s artists and art communities. The Archives provides access to these materials through its exhibitions and publications, including the Archives of American Art Journal, the longest-running scholarly journal in the field of American art. An international leader in the digitizing of archival collections, the Archives also makes nearly 2.5 million digital images freely available online here. The oral history collection includes more than 2,200 audio interviews, the largest accumulation of in-depth, first-person accounts of the American art world.

Troy Anderson was raised in northeastern Oklahoma and northwest Arkansas, settings rich in history and beautiful scenery. This unique area helped inspire him to become an artist at an early age. Anderson is a graduate of West Texas State University and a Master Artist of the Five Civilized Tribes Museum. He works primarily in acrylic and graphics and is also a noted sculptor. He has received awards from the Heard Museum, Philbrook Museum of Art, and Cherokee Heritage Museum, among others. Anderson is a member of the Cherokee of Northwest Alabama and finds inspiration in nature, wildlife, and people.

Tyson Foods, Inc. (NYSE: TSN), with headquarters in Springdale, Arkansas, is one of the world’s largest food companies with leading brands such as Tyson®, Jimmy Dean®, Hillshire Farm®, Sara Lee®, Ball Park®, Wright®, Aidells® and State Fair®. It’s a recognized market leader in chicken, beef and pork as well as prepared foods, including bacon, breakfast sausage, turkey, lunchmeat, hot dogs, pizza crusts and toppings, tortillas and desserts. The company supplies retail and foodservice customers throughout the United States and approximately 130 countries. Tyson Foods was founded in 1935 by John W. Tyson, whose family has continued to lead the business with his son, Don Tyson, guiding the company for many years and grandson, John H. Tyson, serving as the current chairman of the board of directors. The company currently has approximately 113,000 Team Members employed at more than 400 facilities and offices in the United States and around the world. Through its Core Values, Code of Conduct and Team Member Bill of Rights, Tyson Foods strives to operate with integrity and trust and is committed to creating value for its shareholders, customers and Team Members. The company also strives to be faith-friendly, provide a safe work environment and serve as stewards of the animals, land and environment entrusted to it.