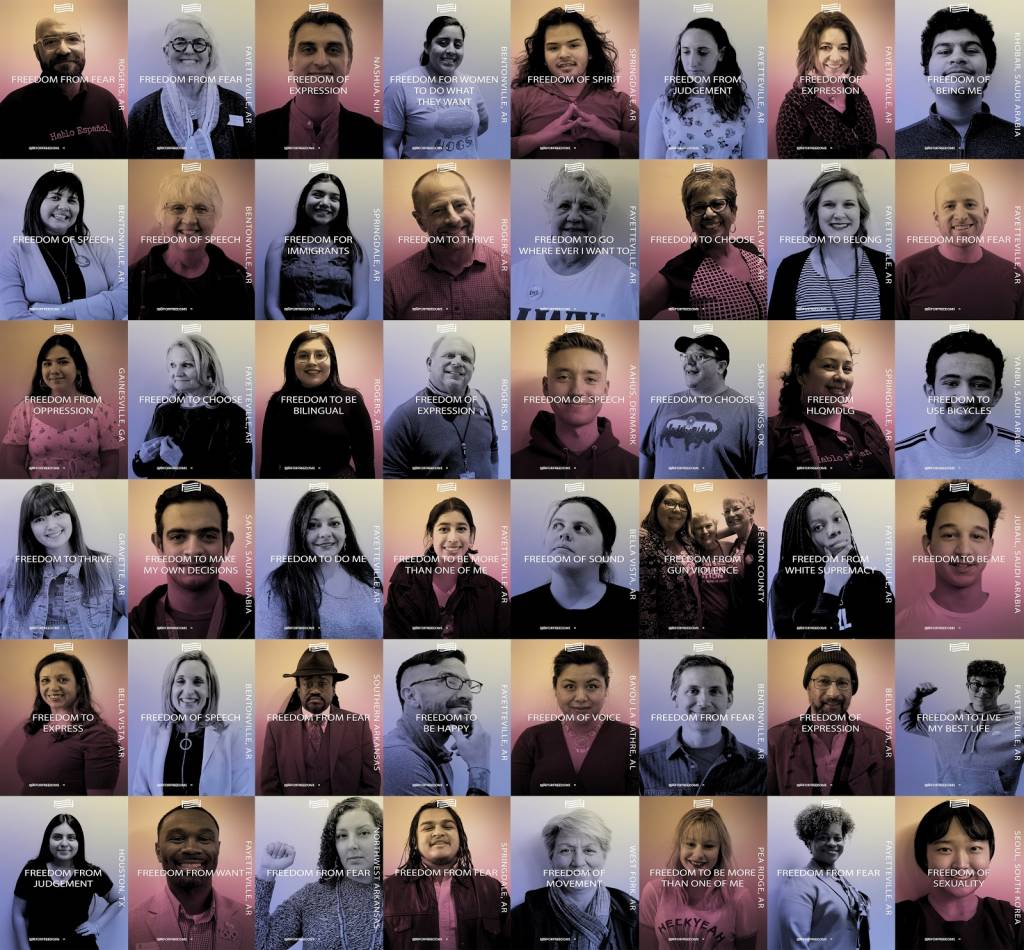 In honor of our visiting temporary exhibition, Hank Willis Thomas: All Things Being Equal… and the ongoing efforts of For Freedoms, Thomas’s collaborative that encourages space-making for art and civic engagement through exhibitions and conversation, the Community Arts team at Crystal Bridges launched a series of For Freedoms Community Conversations earlier this year.

We encouraged Northwest Arkansas community members to share their stories and participate in conversations related to each of Franklin D. Roosevelt’s four freedoms: speech, want, fear, and worship. The goal of these conversations was to foster an experience where community members from all backgrounds and perspectives could come together in a holistic gathering and talk about their lived experiences in a healthy, safe, and positive way. Each conversation was led by a panel of community leaders and artists, and everyone was welcome to attend with an open mind and a spirit of reciprocity.

While there were four conversations scheduled between late February and March, the fourth and final conversation (Freedom of Worship) was canceled due to the museum’s response to COVID-19. However, we were still able to engage in three fruitful conversations with panelists and community members, and we wanted to take the opportunity to share the outcomes of those conversations here. The first Community Conversation focused on the Freedom of Speech, and was held at Crystal Bridges on February 29. The four panelists, Reverend Sekou, Bentonville Mayor Stephanie Orman, Bentonville student Rebecca Ellis, and Ra-Ve Cultural Foundation President Srividya Venkatasubramanya, were selected as a diverse group of varying perspectives to lead the conversation.

Panelists led a discussion on hate speech and whether or not it infringed on other people’s rights. Reverend Sekou, a For Freedoms artist who was in Charlottesville during the violent 2017 rally and protest, spoke about this incident to highlight just how dangerous hate speech can be. He also spoke about his upbringing and how he didn’t know hateful words until he saw how they affected his family.

Bentonville student Rebecca Ellis, who participated in a gun violence walkout at her school, shared the advice that if you see something hurtful being said about someone else, say something and don’t wait for a leader or official to make a stand. What is right and what is wrong is up to the individual.

Other topics of conversation included the need for new language around historic symbols (the confederate statue in the Bentonville Square was discussed), and the need to have updated information about COVID-19.

At the end of the conversation, each participant was asked to contribute to a word cloud by texting one word in response to the prompt: “What does Freedom of Speech mean to you?” Words such as “power,” “truth,” “compassion,” and “respect” were widely used.

The second Community Conversation was held on March 5 at the University of Arkansas, and the topic was Freedom from Want. The panelists included Fayetteville Mayor Lioneld Jordan, Eric Gottesman, co-founder of the For Freedoms artist collective, Director of Full Circle Campus Food Bank Angela Oxford, theater artist Simone Cottrell, and Dr. Alphonso Grant from the School of Arts.

This conversation focused on what it means to be “free from want,” and what an adequate standard of living looks like. With Arkansas having one of the highest poverty rates in the nation, the issue of food insecurity and homelessness were discussed at length by the panelists and audience members. Another question that was posed was whether or not healthcare should be considered a need–a question that is becoming a global topic of conversation during the coronavirus pandemic. 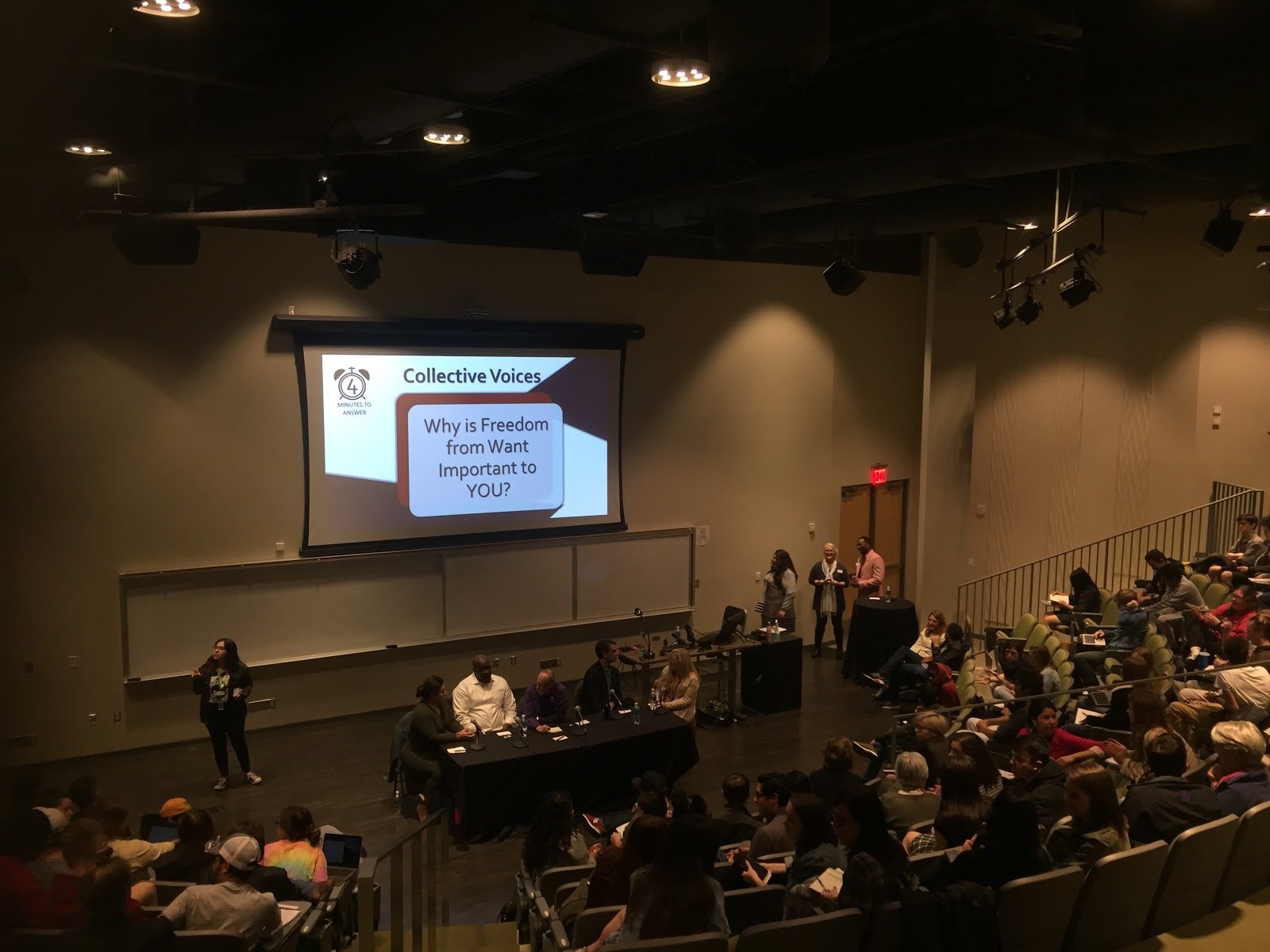 The third Community Conversation focused on Freedom from Fear, and was held on March 12 at Northwest Arkansas Community College (NWACC). Rogers Police Chief Hayes Minor, John McCurdy, Latin X Theater Artist Gaby Arroyo, and Carlos Amargos from the Rogers Public Schools ESOL office, made up the panel for this conversation.

Community members spoke about their lived experiences, expressing that it’s difficult to function in daily life when they don’t feel protected. Freedom from fear looks different for everyone, and this panel did a great job exploring how those differences can come together to create a future without fear.

Out of each of these conversations, panel members and community members alike left with feelings of hopefulness and encouragement that their stories were heard and that they could express their truths safely. Panelists also appreciated the chance to express their opinions about the subjects that were discussed.

At each conversation, we encouraged attendees to have their photo taken and choose a freedom or value that they hold close to add faces of the community to the larger “freedoms” conversation in collaboration with the For Freedoms artist collective. As part of an activity proctored by For Freedoms, we fashioned it into a Photo Quilt, seen below. When Crystal Bridges reopens and public programs resume, we will continue to host monthly community conversations in various spaces around Northwest Arkansas as well as at the museum. We look forward to welcoming all to share their experiences as part of our collective American story, and to continue talking to one another about issues that affect all of us.

Thank you to those of you who participated, and a special thanks to our partner, the University of Arkansas IDEALS Institute. Thank you to the League of Women Voters Benton and Washington County chapters for supplying voter registration information tables, and Mom’s Demand Action NWA Chapter.